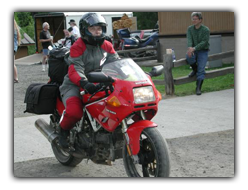 Maryhill State Park is a 99-acre camping park with 4,700 feet of waterfront on the Columbia River in Klickitat County. The area is significant for its natural beauty, its access to the surrounding natural wonders and its cultural history. A full-scale model of Stonehenge stands near the park.

Maryhill State Park was acquired by lease from the U.S. Army Corps of Engineers in 1972 at no cost. Sam Hill, considered a local eccentric, built a "castle" for his daughter, Mary, on a hill, and named it "Maryhill." He designated the beautiful building, originally designed as a family home, as an art museum before the end of its construction. Mr. Hill built a full-scale partial replica of England's famous Stonehenge one mile from the state park. [Unfortunately, when Sam Hill copied Stonehenge he didn't get it oriented like the original, with respect to the compass]. Both Stonehenge and the Maryhill Museum of Art are open to the public.

Excellent paved motorcycling roads abound in this area, including Rock Canyon on the Bickleton-Mabton road, WA 142 along the Klikitat River, the backroads up through Glenwood, Trout Lake and on up to Mt. St. Helens. On the Oregon side of the river are the network of roads bounded by Mt. Hood on the east, Redmond and John Day on the south, La Grande on the east, and the Columbia River on the north. Hardly a bad road among the bunch, and some truly memorable stretches in there with excellent 'character' and great scenery. Bring your camera, and watch your speed — Oregon has stupid-low speed limits on rural roads...

There were quite a number of other nice photo collections, but they were all hosted on Picassa, which, as you may know, Google killed off awhile ago...

We have an option for a few Gatherees to spend Sunday night in the campground. Rolf has pre-paid for this, if you wish to stay Sunday night also, please slip him $10 or so...